Happy first day of May!  I don’t know why, but I find it exciting when the first day of the month begins on a Sunday.  This past week was officially my last week of extern!  It was sad saying good-bye to the residents and to the other therapists, but I am just so excited to graduate! Also, my 30-page research project is officially done! I drove to campus on Thursday and stayed late to finish/review it with my research advisor.

The highlights from this past week was having this twice baked sweet potato and pasta. 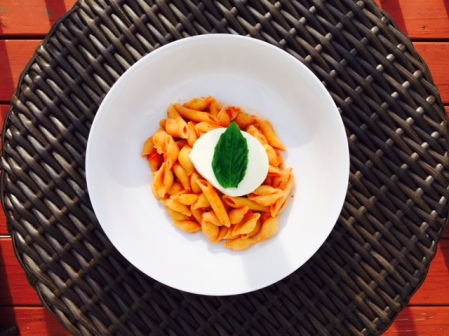 Did I mention that all the m&m’s purchased after Easter is now officially gone!? It’s gone. Being able to eat 674 m&m’s may fall into the top 3 reasons as to why I run!

I ran 10.5 miles on Monday, and my knees began to hurt a lot, so I decided to take the rest of the week off.  I did get up this morning at 3 a.m. to get a 22  miler in though!  I ran on the treadmill, so I took a couple breaks, but that run felt nice! I’ve been asked numerous times if I was running the Pittsburgh Marathon, and the answer to that is no. Today was the marathon, and I actually have absolutely no desire to run Pittsburgh. After my run, I watched ManU play Leicester City.  Martial is great.

In honor or Beyonce’s new album, I made a lemonade pie.  It was so refreshing, and SO good. Her song, “Hold Up” is so good.

I hope you’re off to a great start of the month, and enjoy these three remixes!