I was feeling anxious, and I actually even had a lot of doubts leading up to the week of the race.  I thought I wasn’t ready, that I would re-injure my foot, and that I would have to sit out a couple more months again….but I just went with my gut and decided to go through with the race! I’ve heard a lot of great things about the Phoenix marathon, so I was excited.  I LOVE small races.  Boston was an amazing experience, but it was just a little bit crowded for me! The Phoenix marathon was a little tricky.  If you look at the elevation chart, it looks like you will just cruise through the whole course.  BUT, there are a good amount of rolling hills in there! The first half of the race, I felt GREAT! Then came mile 15. My foot began to hurt A LOT.  I honestly thought I re-tore my tendon and I would have to drop out (something that I’ve never done, but I guess there is  first for everything)! I kept running though, and when I got to mile 21, I knew I just had to cross that finish line. I believe my finish time 4:01:53.  FAR from a PR, but I was ecstatic that I finished! After crossing the finish line, they had THE best booths set up! LOTS of food.  Out of all the races that I have ran, the Phoenix marathon definitely had the best after race party! They were also handing out the most amazing french toast from Kneaders Bakery & Cafe! I usually don’t feel like eating after a long run, but one bite of that french toast, and I was sold! It was SO good! If you live near a Kneader’s, you definitely need to try the french toast!  I also tried muscle milk for the first time, and I actually liked it! Maybe I will start using this as my post run recovery fuel.

Japanese ramen before leaving was a must!

The views and sunsets in Arizona are breathtaking! Nature always reminds me how amazing God is.  Honestly, the past two weeks has been an emotional roller coaster for me, but being around nature and running with an amazing view was healing. Unfortunately I didn’t get any pictures of the sunset.  Maybe I’ll have to take another trip down there!

Not to go off on a tangent, but all I have to say is that the highlight to this past weekend were these: 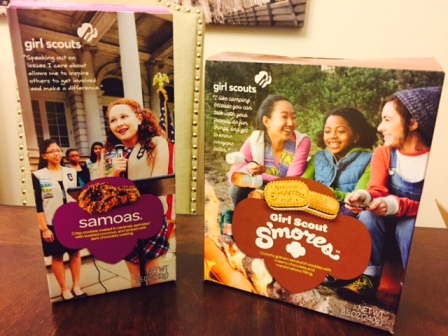 Samoas are a MUST.  The s’mores one were pretty good too! Make sure you grab a couple boxes before they stop selling them!!! I haven’t ran since last weekend (I’m really try to watch my foot).  I did get up extra early this morning though and walked 18 miles on the treadmill.  Crazy, I know, but I needed it.  Lots of time to think.  Hopefully I’ll be able to get 3 or 4 miles of running in tomorrow! Some chill songs to end the week!

Two weeks from today, I will be in Arizona! Since running Boston, I did a total of 0 races.  My foot is actually finally starting to feel better (it mainly feels tight after running) and now that I don’t have any pain on my face, I feel like I am getting back to normal.  I am definitely by no means even close to my best fitness level.  I signed up for this marathon, hoping to get back into running again.  Choosing a February race was a poor decision on my part, because that meant I would have to be training during the winter months.  BUT, I already have a fall marathon picked out, and I am READY and REALLY looking forward to putting in some hard work during the summer months!  On a more exciting note, these shirts are available for purchase!!! I have been working on these for a little while, and I finally decided to put one up! For all you running queens, they will be up for 10 days, and they come in two different colors! The tank comes in coral and dark grey heather.  The shirt comes in heathered charcoal and new navy!
Here’s the direct link: runderful life

I was hoping to run a 15 km race today, but there was still ice, and I did not want to risk slipping on ice! It’s actually REALLY nice out today for February, but I didn’t want to chance anything.  Being injured is NOT fun.  SO instead of running the race, I had pancakes! Banana lemon blueberry ricotta pancakes with honey! That’s a mouthful.  I have pancakes every Saturday, and I will not be steering away from that tradition anytime soon! I’ll be running my last long run tomorrow morning!

Looking forward to saying goodbye to winter!!!! Good luck to anyone racing this weekend!!!
Love this music video! It reminds me that ALL women are beautiful!